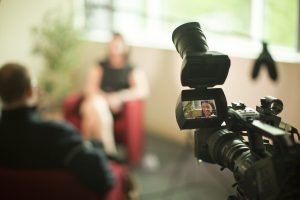 Video Production on a budget

So you need to produce a video but money is tight. You’ve checked out the local corporate video companies, looked at the cost and decided to make it yourself. After all, most people have access to a video camera, a stills camera that shoots video or even a mobile phone.

Now, you may find it strange that a professional Video Director such as myself should be giving free advice away – especially as it’s what I get employed to do and how I’ve been paying the bills for the last 12 years. However, we regularly get called in to help finish a DIY video that has gone wrong or get handed a project that has been abandoned by a photographer who has decided to enter the film-making business only to come unstuck during video production, so it really is in our interest to help ensure the material that comes our way is as good as it can possibly be . If it’s successful you may have the budget next time around to let us handle the whole shebang.

First of all a book that I used at University, written over 20 years ago now but still very relevant today, is On Camera by Harris Watts. There used to be some great videos that accompanied this made by the BBC but I think they have long since disappeared. If you can’t get hold of this (and no, you can’t have mine) then here are some simple things you can apply that will make sure you stand a fighting chance of making something today’s time poor audience will sit through.

Most videos made in house suffer from being shot hand held, with too few locations and poor composition. When you get to the editing stage there’s just not enough material to cut together, resulting in horrible jump cuts during interviews or boring things being held on screen for too long. So give yourself enough different locations and interviewees to make it engaging. The same subject matter shot from a variety of angles or different framing such as wide, mid shots and lovely detailed close ups will pay dividends in the edit. Even the same topic spoken about by different employees in different locations cut together is far more interesting than one person framed in the same way speaking at length about the same topic. If you have three interviewees and no cutaway shots, you can still make a convincing edit cutting back and forth between them. This will also help you to cut down what they are saying, when you get into the edit you will realise what seemed interesting while the camera was rolling now seems long and laboured.

Composition of such interviews is vital – not as important as sound, which we will be covering in a later blog, but a very close second. Don’t sit your subject in the centre of the frame, unless they are addressing the camera (and therefore the audience) directly. If the interviewee is talking to someone sitting off camera left , frame them to the right of of the picture – like this:

It will give them room to look, a place to put their name and job title but more importantly will just be pleasing to the eye. Film your next interview the opposite way: left hand side of the frame looking out to the right of frame:

If you do this and also alter the framing wide, mid and close (but not too close), you could then just cut these two interviews together. Where you film and what you decorate the background with is up to you, but the less clutter the less chance there is for continuity errors or objects seeming to jump about in the edit the better. If it’s simple your audience will be less distracted, and after all your audience should be at the forefront of all your decisions within the frame.

Experienced camera crew are mindful of these rules of composition while keeping an eye on the focus and lighting, positioning of mics and sound issues, drinking tea, chatting to the interviewee to make them feel at ease, formatting discs for filming – not to mention listening to the responses from the interviewee!

If you just concentrate on simple framing for now you will see your work improve and your audience will at least watch the first 30seconds. What the interviewee is saying and if they can be heard with clarity is another topic we will cover later. For now just be mindful of composition and framing. If you want to look deeper in to the subject of composition and lighting, I highly recommend the brilliant documentary on cinematographer Jack Cardiff.

In the meantime, inspiration can be found anywhere from watching dialogue scenes from your favourite films, or even just try turning off the sound for a while and watch the pictures – it’s a great way to learn great composition.

So rule 1: Think composition and coverage first, and move on to creativity only once you have those two aspects nailed down.

Shoot it all on a tripod and no zooming! Just trust me on those last two points.

So good luck, take your time and if you need any help you know who to call! (MGL Media – Video Production, Leicester of course)