It was getting to that time of year again – updating our showreel and promotional material –  but this time we decided to do things a little differently and have some fun in the process. Yes, it was time to get all animated as we took the opportunity to create a good old fashioned cartoon.

Our first move was to approach Paul Wood – cartoonist for such publications as Punch and Private Eye, and our long time collaborator. He has designed a number of our company Christmas cards and has a great talent for turning ideas in to reality. You can check out some of Paul’s previous work here.

The first script was written with some very basic sketches, which were then refined and built upon by Paul, who put together a storyboard to allow us to visualise the cartoon in full. After a few more script tweeks and the addition of a few more sight gags, Paul then began to produce the final artwork.

The artwork was then scanned at high resolution ready for compositing and animating within our post production suite. Although modern software and techniques were used, we were keen to maintain a more retro style of animation in the same vain as some of our favourite kids tv shows such as Roobarb and Custard. 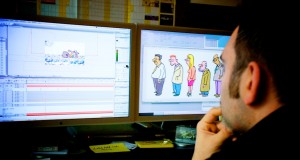 2D character cut-outs were animated within 3D layered environments, enabling us to increase the sense of movement, as well as being able to use camera zooms and pans to elaborate on visual jokes.

When we had our first rough cut completed it was time look at the soundtrack and voiceover for the cartoon. Initially, a suitable piece of music had to be sourced, with us eventually settling on a jazzy Django Reinhardt-style piece. The promo also required a huge array of sound effects. Some of these came from our extensive library, but many of them were bespoke sounds that we recorded using our audio production facilities. It was a long but enjoyable process – making and recording cartoon sound effects was no ordinary day at the office.

Although we had recorded a guide voiceover to enable us to time the cartoon, we now needed to record the final version, utilising the vocal talents of our very own Matt Holt. After trying a few variations, we settled on the Terry Thomas style announcer that you can hear on the finished version.

So, there you have it. After lots of fun and hard work the final promo was finished. Although this method of animation is far less time-intensive than traditional cell or stop frame techniques, the final 3 minute piece still took over 2 weeks to complete, including recording sound effects and producing the final mix.

This style of animation can be a great way to get your message across – particularly when targeting a youth audience or when working within an educational environment. In fact, we are currently looking for partners for an animated short that highlights the importance of recycling and other environmental issues. We have a script and storyboards ready to go – so if this sounds like something you’d like to be involved in please get in touch.

In the meantime, we hope you enjoy watching the promo as much as we enjoyed making it and we would love to hear your comments and feedback.